. After selling my Borg 77EDII I started to miss some smaller (meaning still easily portable) refractor. I wanted 100mm of aperture and something not slower than F/4.3 like my previous Borg. With Riccardi reducer I may reach F/4.15 rendering nice 415mm focal length. Should be a double factor „win“ on behalf of weight – Esprit is much heavier and notably bigger.

Therefore I started with weighting parts of it right after unpacking the nice triplet out of inconvenient-size-case it came with. As you can see, just the dew shield weights about 865g and the tube rings and mounting plate adds additional 1254g while the rest of the scope is just 5.9kg i.e. below 6kg exactly as advertised. But, unfortunately even the smallest setup I intended to use with the telescope (AtikONE + OAG + QHY5L-II guidecam) weights almost 9kg which is much more then I would like to put on my small and portable iOptron iEQ30 Pro mount. Therefore I replaced the mount for iEQ45 Pro later this year.

Since, next time out with the scope under a half-clear sky, I had issues with the iEQ45Pro, I focused on testing the Strehl of my new telescope using a software called WinRoddier. I managed to capture intrafocal and extrafocal images which is enough to feed the software with in order to get some basic parameters calculated. My quick test case (using Atik ONE with UV/IR filter) showed Strehl ratio of 0.97 ! That is a hair bigger then real (true) measurement on the optical bench performed by Tommy Nawratil from Teleskop Austria. BTW if you want to get any of the Esprit family telescope, the best purchase point is HERE. Tommy measured 0.945 which is great enough. I am still in the process of finding correct back focal distance for Riccardi 0.75 reducer that I got for this „baby“ to bring it to a reasonable optical speed (shooting at F/5 is way tooo slow for me because I am really happy with F/3.6 ASA Newtonian – who tried, never wants to go back to use any slowish refracting telescope with fast changing focal point during a typical night moreover having to focus manually). Therefore following output from CCDInspector is just a first (or second) light attempt to focus somehow, somewhere… this will require lot more time to settle. Vignetting with my first light setup (in the end used with MII G3-16200 that is a new camera based on OnSemi’s latest KAF-16200 CCD of size 27,2 × 21,8 mm) is roughly about 13-14% in the very corners. I plan to test this with all cameras and focal length reducers I have at the moment at home in order to give this highly acclaimed information to the public

As a last image for this first sight report I’d show a star picture (center focused). 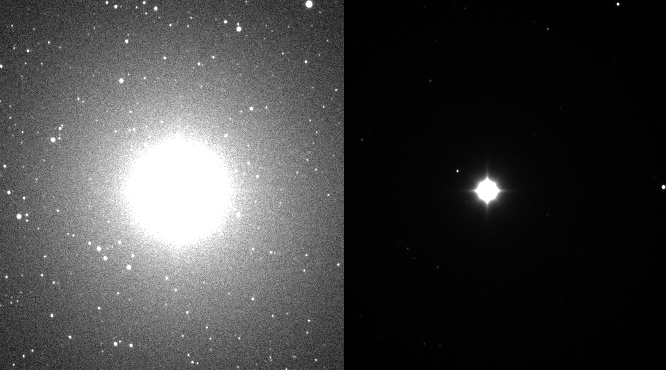 Maybe I could also show a real first light of this telescope: