29th August 2014 and 17th September 2014 two important dates in my CCD camera life. The former is when I sold my beloved Atik460EXM and the later is when I pulled the trigger and ordered Atik ONE 6. I simply cannot imagine a life without SONY ICX-694 even though I moved from a keen narrow band (Ha/OIII/SII) astrophotographer into a keen broad band one (LRGB) using a big full frame size chip. I would very much miss the opportunity to combine a nice HST images. My motivation was to have some kind of integrated filter wheel in place and possibility to add some OAG and therefore I purchased the Kit version which comes with a replaceable OAG and Atik GP guidecam.

Let’s check what you find in the box, OK two boxes: 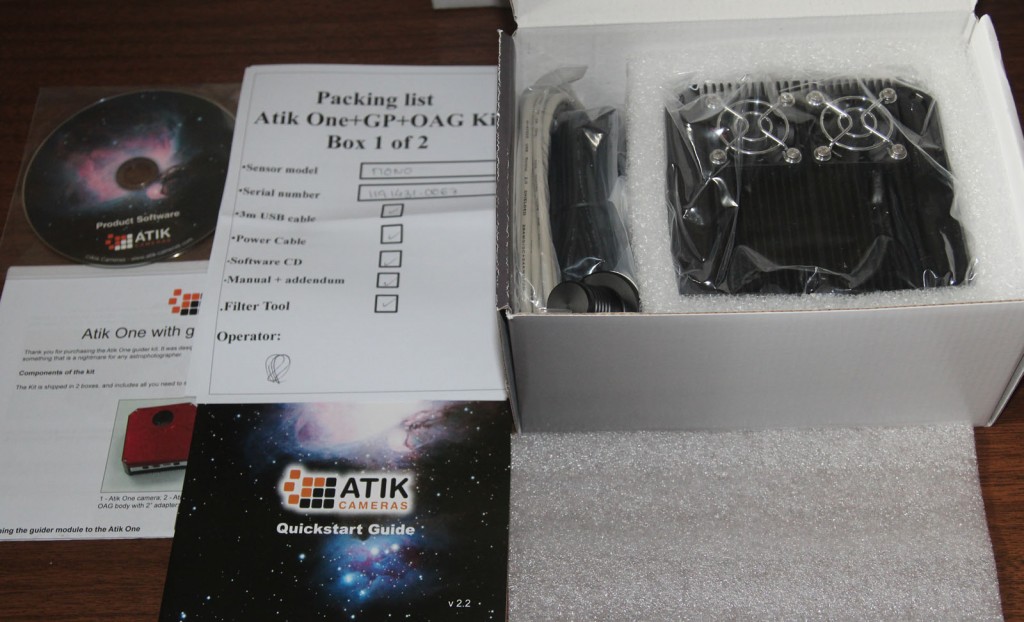 In the first box you find the main camera body, 3m long USB cable, little shorter – 1.8m only power cable (with 12V socket), CD, manual, quick start guide and filter replacement tool. In the second box you find the OAG with mounted (could be unmounted) 2″ nosepiece and focusable guideport (for T-thread equipped guidecam) along with the small Atik GP guidecam body and short mini USB cable to be used to connect the guidecam with the main Atik ONE camera which possess a USB hub and some three hex tools (keys) and three replaceable screws (long ones) to mount the OAG on the camera body. The camera body comes with standard T-thread adapter which can (and must) be unmounted (three short screws) in order to (i) insert filters inside the internal filter wheel and (ii) to mount the OAG on the camera body. But, obviously, you can choose wheter to install the OAG or not, I still haven’t mounted mine and will do a first light without it as if I purchased Atik ONE 6 in the non-Kit version.

Since I haven’t used the OAG yet I give a brief comment only. It looks well built. The focusing seems just fine with the big focus ring, smooth and solid enough just as it is. The focus lock knob is kinda small and therefore ineffective as you can easily overcome it with just little force applied on the big focus ring, that’s simple physics. But anyway, the smooth focus (supposed travel 5mm) is NON-ROTATING which is great and as I said, seems solid enough. One downside, if I could afford to tell without actually using the device, is that the „sight-hole“ for the OAG camera is small (although the prism mirror is reasonably sized and could be put deeper or shallower inside of the OAG)! It is only 6mm in diameter which is suitable for only 1/4″ sized chip guide cameras! For my new G1-301 with 1/2″ chip and 656 of 9um pixels it won’t be usable without severe vignetting (knowing that prior purchase I got the non-Kit version and save $$$ for other OAG). Therefore I will probably use it with QHY5L-IIm (alccd5L-IIm) which I decided to keep for this other imaging setup or as a spare guide cam. From the backfocus-point of view, the Atik GP has 7mm of backfocus while QHY5L-II has plenty of variability based on which adapter you use – in the worst case I will have a custom adapter built.

What to say about the main Atik ONE camera? Apart from it’s brother platform-4 family of Atik cameras (round body) it possess an integrated filter wheel which makes the square body of the camera bigger – 12 x 12 x 6 cm WxHxT. It has two standard 1/4″ tripod attachments (deep enough roughly 6-7mm), but unexpectedly on the side of the body. It has bigger (finally a good improvement for a field use / non-permanent setups) USB-B port and integrated USB hub. The downside is, it looks so, that the USB hub is somehow limited and supports only Atik GP camera. I tried to attach a MII G1-301 or QHY5L, but did not succeed. Maybe it is me (high probability as my stupidity doesn’t have a fixed boundaries), maybe it is the same (not-smart) decision from Atik like with their proprietary Dawn post processing software that was able to open only FITS frames from an Atik camera (not sure if this limit is still valid in the actual version of the SW). My personal opinion is that it is a silly decision. Atik ONE dimensions and weight

Everything is a compromise. An ideal CCD camera would come with a 8 pos (at least, 7 isn’t enough – at least for me) filter wheel, but you can’t have it in a compact form. I like small and compact but extremely powerful cameras. Since shooting LRGB with a tiny pixel (4.54um which on the other hand yields nice resolution and detail) is „wasting of time“ for me and since the ICX 694 „sings“ in narrow band imaging due to the very low readout noise (and overall noise) of the chip (and camera) as well as with high QE in the desired wavelength (extraordinary OIII, very high Ha and SII) I am quite happy with 5 positions in the integrated filter wheel which keeps the camera compact (weighing 911 grams without filters, with T-thread adapter). Installation of the drivers was smooth and OK as long as you had ASCOM 6 (or 6.1) installed. I did not have so I had to reinstall my ASCOM platform 5.5 along with all other drivers. The main driver works fine for Atik software, but for everything else ASCOM is the way to go. It is interesting that the main camera body must be selected as „Atik 2″ while the guidecam must be choosed as „Atik“. Would be wiser to choose better naming convention I guess. Anyway the cameras work.

One of the initial tests comprises of a TEC cooling test: From ambient temperature of 22.4 degrees Celsius I got to my set-point temperature (-15) in about 4 minutes using 95-96% of TEC power. This shows the maximum delta to be around 38 degrees Celsius which is perfect even for hot weather countries. I forgot to measure the current draw though (but let’s assume the spec will be correct as it is with everything else I tested in order to confirm the facts).

Next quick test is download speed. For 1×1 binning I got the image downloaded in about 8 seconds. This seems little strange to me. I can recall that my former Atik 460EXM was downloading faster, I believe in some 4-5 seconds (not 100% sure at the moment as I can’t verify it now having my 460 sold). In bin 2×2 mode I got the image downloaded in roughly 3 seconds. Anyway, I never plan to bin unless I start to shoot small planetary nebulae with 2+ meter of focal length. 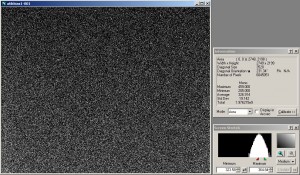 Another quick test is the readout noise test that I base on my Octave (Matlab) script I use for camera noise comparisons.

and here are the results from Atik GP:

The filter wheel looks fine, it produces some „click“ sounds when positioning the filters and according to images of the wheel (disc) internals it looks very well built. For mounting or replacing filters in the wheel you have to (the easiest way) unmount the camera adapter which is kinda inconvenient, but I won’t replace them frequently.

So far so good

For a real first light test we’d have to wait until I get my other (2nd) setup up and working, now I am finishing some LRGB shots done with ASA and G3-11000 which has top priority.