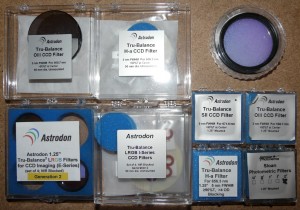 A couple of months ago, when I attached my little and powerful narrow band imager Atik 314L+ to a Zeiss DSLR lens in order to do some wide field imaging, I was wondering how fast could I go with the iris shutter. Because I have never used a DSLR for ordinary imaging I had no idea how to take off the lens from the DSLR body preserving the selected F-stop ratio. Fortunately a friend of mine (David Kraft) helped me on the phone and I had a successful imaging night.

The first issue I faced was a weird shaped star at F/1.4 (widest aperture). Today, I am almost sure that the cause of such star deformation was in an imperfect attachment of the lens with the CCD camera (I very dislike the DSLR bayonet style attachment, which tends to be everything but square). When I learned how to step down the F-stop ratio I went, just to be on the safe side, to F/3.2 and took a nice image with Astrodon 5nm Hydrogen Alpha filter.

But how fast could I have gone with this imaging setup to get the most of it? Finally, I managed to do some simple tests to prove the quality of Astrodon filters with respect to the spectral shift when used with a fast optics.

First thing needed for such a test is a source of hydrogen alpha light. I used an EL panel covered with a black sheet of thick paper with a small (less than 50mm diameter) hole, allowing the light emitted by EL panel to pass through a helper-filter that was placed on top of the sheet. The helper-filter (50mm round) allowed only the selected wavelengths to pass through it and in fact acted as an artificial source of either hydrogen alpha or oxygen III light. I understand that the bandwidth of 5nm is somehow wider than what we get from a real DSO object when imaging the universe, but it should not matter that much.

Next, I selected the F-stop ratio of the lens attached to a DSLR body, unmounted the lens preserving its F-stop, mounted the lens to the CCD camera and set a constant focus point. Then I took a set of five raw images (FITS) through the tested 1.25” narrow band filter mounted in the filter wheel of the CCD camera. I have calibrated (bias, hot pixel map) and stacked (median) the set to create a master frame. I have created a couple of master frames taken at different F-stop ratios starting from F/4 down to the widest aperture at F/1.4 and noted MAX ADU value in every master frame for given F-stop.

Following table summarizes all relevant data: F-stop ratio, clear aperture of 50mm lens (in millimeters) corresponding to F-stop ratio, light gathering power (in “light-units”), percentage improvement of light gathering power (in %) based that 100% is at F/4, measured MAX ADU value (in ADU) and percentage improvement of MAX ADU value (in %) based that 100% is at F/4. As apparent from the chart, the 5nm hydrogen alpha filter could be used with as fast as F/1.8 optics without significant penalty on decreased MAX ADU value (i.e. loss of the signal level). Taking into account the issues with square mounting of the lens to the focal plane of the CCD detector (collimation of the imaging telescope or lens) and the size of the critical focus zone (CFZ) for hydrogen alpha light (10.37 micrometers for F/1.8 optics, but 20 micrometers for F/2.5 optics), I would suggest to use the 5nm filter at F/2.5 or F/2.2. Stepping down from F/2.5 to F/2.2 would bring an improvement of 21% in light gathering power. Whether is it worth it or not depends on everyone’s particular imaging setup (e.g. automated focusing tool).

Therefore the other night I could have used the lens at F/2.5 instead of F/3.2 so I’d gather comparatively 49% more light during that imaging session (in other words, it is like imaging 7.5 hours instead of 5 hours provided that all relevant factors affecting this theoretical computation remains constant). Lesson learned

Having the cables on the table and some OIII filters at my disposal I decided to make yet another experiment. Unlike to hydrogen alpha, my oxygen III filters are of different bandwidth. The bigger one used as an artificial source of oxygen III light is 5nm wide while the measured one is only 3nm wide. The sensitivity (QE) of the Sony ICX285 CCD detector at OIII line (500.7nm) is much higher than at hydrogen alpha line (656.3nm). I am not completely sure how relevant this OIII measurement really is, but I believe it still makes some sense.

Here’s the data table for the OIII experiment:

Here’s the chart that shows the correlation of percentage improvements: 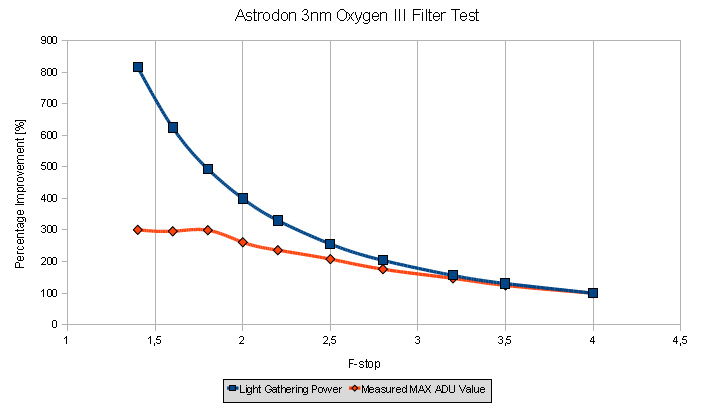 As apparent from the chart, the 3nm oxygen III filter could be used with as fast as F/2.2 optics with some 29% penalty on decreased MAX ADU value – but still, the much narrower bandwidth of the filter (3nm vs. 5nm) will considerably reduce the effect of light pollution and moonlight gradients. Staying at F/2.5 would give 19% penalty and at F/2.8 only 14% penalty. Because the iris shutter doesn’t create a perfect circle my theoretical computation of light gathering power and expected performance of measured filters might be off by some percentage. Anyway sticking with F/3.2 keeps you on the very safe side. Discussed critical focus zone (CFZ) for oxygen III light at F/2.5 is 15.27 micrometers while at F/3.2 as large as 25 micrometers.