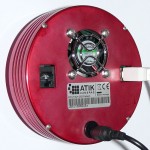 Finally, after imaging with this CCD camera for more than two years, I decided to write some short review of this master-piece. I have focused on the main parameters like light response, gain, readout noise, dark current, TEC cooling tests etc.

Ambient temperature was 20.6°C when I started a set-point cooling test. This test was done in order to show how well the cooling works (unlike of QHY cameras) and how it normally should behave. The CCD chip was at 22.4°C before I turned the cooling on. Following chart shows how straightforward the cooling is. It took a bit over 2 minutes to reach -5°C with +-0.1°C immediate regulation. The camera was drawing around 920mA with TEC power at 78%. Without TEC cooling, the camera was drawing around 400mA (5W). Maximum temperature delta (from ambient, in a stable laboratory environment) 29.8°C.

In order to measure the camera gain with highest possible precision I decided to take a set of five Flats for every point in the chart shown below. This resulted into 4 computed values that were averaged to minimize possible deviation. I have used the approach described by Craig Stark in his SNR talks – Measuring your Camera. Result? Gain 0.26e- with reachable maximum ADU of 65535 (16-bit ADC) means that Full-Well capacity of a single pixel is about 17084e- (every pixel can accommodate that many electrons before it saturates). The CCD camera ADC settings (gain < 1 e-/ADU) essentially sacrifices dynamic range (that is on the other side limited by the FWC of the CCD chip) and this brings many positives. First, the CCD camera is truly linear within almost whole range (up to over 60000 ADU). The rule is simple – proportionally longer exposition must give proportionally higher signal value provided the chip illumination is constant.

Unfortunately, the longest dark frame that I found on my hard drive was only 5 minutes long (the Light frames from camera doesn’t have to be calibrated on dark current at all). The longer dark frame we have, the higher precision we can reach. I have computed a mean value of a dark frame to be about 266.750968907 ADU. Subtracting a mean of a bias frame (265.847268273) from a mean of a dark frame gives us 0.9 ADU or more precisely 0.23496216484 electrons. Therefore during 5 minutes (300 seconds) the camera average intensity went up by 0.9 ADU which means by 0.0007832 electrons per second. Pretty low number

Do not calibrate your Light frames taken with this camera for dark current or you introduce lot more noise than you may ever remove. Calibrating with Bias frame is sufficient (along with either dithering during your imaging session or removing the few hot-pixels with a hot-pixel map). This holds true for CCD temperature below zero degrees of Celsius. This particular dark current measurement test was conducted at -5 °C.

From a point of view of a keen narrow band imager (me) this parameter is the most important because it’s inevitable to avoid this kind of noise (you simply have to readout the data from camera many times). The only way how to live with these-days noisy cameras (all “low-noise” cameras with around 10e- of RN (BTW in the past the good standard was around 15e- therefore 10e- seems as low-noise) which is the majority of KAF-8300 based cameras, is to make as long subexposition as possible (not discussing you will probably be limited by the wideness of your narrow band filter unless you have 3nm which is simply the best and far superior to 5 or 7nm). Atik 314L+ is a rare exception of unbelievably low noise which opens doors for reaching of new horizons. This means that you can reach the very limits of narrow band imaging. Example: Full Moon, landscape covered with snow, SQM-L being only around 18 at zenith, shooting over 3nm narrow OIII filter with low readout noise CCD camera. My test showed that I can limit the exposition to say only 5-6 minutes with still capturing useful data. No other combination (camera + filter) could do that at such adverse imaging conditions. With regards to LRGB imaging with F/4.3 telescope, the ultra low readout noise allows doing only 2 minute long subs in L and about 3 minutes in RGB. Shooting longer subs doesn’t bring almost anything while with more (though shorter) subs you can more effectively decrease the overall noise by stacking more images. Simplified rule for Atik 314L+ is that if your background ADU is over 900, then it doesn’t make any sense to go for a longer sub and vice versa.

In the past, I have written a computer script (in Octave/Matlab) that automatically computes readout noise of your CCD camera from your raw calibration data (base rule using 5 Flats and 10 Biases in order to be able to compare various CCD cameras from various manufacturers against each other using the same approach to get reasonable numbers).

This script says that my Atik 314L+ has gain 0.25945 e-/ADU which is pretty close to 0.26069 computed the hard way of covering whole range of ADU values and doing regression analysis (note the equation “f(x) = ” in the Camera Gain measurement chart above). It’s much simpler and equally precise, your flats only needs to be in the linear range (every CCD camera should be linear in a range of 25000-35000 ADU).

If you are interested in your CCD camera’s readout noise measurement, just provide 5 Flat fields and 10 Bias frames (everything with cooling on) that you already have on your hard drive to me for download or contact me at my personal e-mail address.

Today, there’s finally a superior CCD camera to Atik 314L+ named Atik 428 EXM using new generation Sony ExView HAD II technology CCD chip (ICX674) with smaller pixels (4.54) and still much higher QE (quantum efficiency) that seems to be over 40% higher in both H-a and SII lines compared to Atik 314L+ with ICX285 !!! A must have for me next time… or a ICX694 based camera that will be most probably very expensive, but really cool Noticed the 4 camera boxes from Atik? Am I Atik loyal customer? Maybe. I do not care what is your name, I care for the best quality, period.

To complete the report, I should show some images taken with this camera. Last year, my best image was M97 taken with 6” achromatic refractor. In my opinion it’s comparable to those taken with 1.2 meter telescopes as I was leveraging the thickness of Astrodon filters. UPDATE: the only drawback of ICX285 (that is the CCD chip used in Atik 314L+) is its size, Type 2/3, having diagonal only 11.02mm. With 1.4Mpix resolution of 1391×1039 pixels it puts high demand on focus and autoguiding in order to present your images in 1:1 scale. On the other hand, it’s usefull for small targets and because of its low noise it allows for lucky imaging (taking sequences of thousands of images with subexposition of 5-10 seconds) and therefore it’s also suitable for long focal length telescopes (6.45um pixels are generally OK for all kind of telescopes).