Newtonian astrograph is probably the best choice for those of us who are seeking ultimate performance. But, there are plenty of really key (fundamental) things that must be built with highest precission and quality possible. One of them is the secondary holder. Along with the need for ultimate focuser I have myself decided to go with Astrosysteme Austria (ASA) and in spite of couple of problems I have found, I do not regret this choice (because I am the left handed guy who has both hands left ones and am not willing to spend years on home making while I know that I would use ASA focuser and ASA reducer/correctors anyway).

Because a major problem for the mirror-based telescope is that it holds the collimation (you have to be able to collimate and the telescope has to keep the collimation over time as much as it gets while the secondary holder is the key thing in this regard) you need it to be robust and solid. OK, so what are the secondary holder options? A thick one (4mm) works well in this regard, but it produces very ugly square like stars – this effect is more apparent on smaller apertures below 12″ (from 300mm upwards a 3-4mm thick single spider would be fine and would not produce square shaped stars). Another option is so called double spider that has 8 vanes in total. ASA uses (since recently) this double spider option made out of carbon for increased stiffness. The other parameters like the distance of the double spider vanes and the ratio between aperture size and vanes thickness are responsible for the shape, length and appearance (diffraction specturm) of the diffraction spikes. This topic would cover a dedicated article, but as it can be googled out I won’t spend my time on it. One single comment would be that when you use a narrow band filter that filters all wavelengths except of selected narrow one you get a dash line diffraction pattern.

Back to the issue I have. The double spider, as everything, has good points and bad points. The bad is that it requires the spider vanes to be both perfectly parallel to each other and also in-line on both sides from the central part (that holds the secondary mirror). Even though my ASA telescope had precisely drilled holes for the spider, the carbon-made vanes were not aligned to be in-line from one end to the other end of the OTA (I can imagine that tightening screws could be on blame too, but you know, you need to tighten, but no overtighten).

To give some evidence on this fact, let’s first see how a collimated telescope (with PERFECT BACKFOCUS) image looks like (here I managed – luckily, somehow – collimate my telescope perfectly, but I was having the splitting diffraction issue – nowadays the issue is fixed, but I have not managed to collimate so well since then). 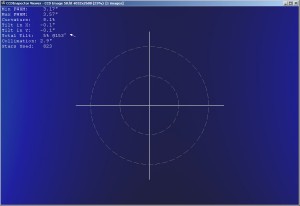 Then have a look at the diffraction spikes that apparently split more and more as they are farther from the brighter star. For those unable to see this effect I have marked it in detail with red arrows. 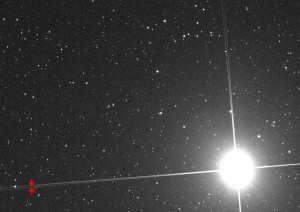 Therefore, when you have everything perfect, but get this splitted pattern and you own a double-spider then you should check the in-line-ness

or parallel-ness of the spider vanes.

Fortunately, when I contacted ASA (Dietmar) they were „responsive“ and I scheduled a one day trip (visit) to ASA premises where their engineer fixed my problem. Well, now 7 out of 8 total vanes are perfect. Since I truly understand how this is complicated to do, I am happy now. Anyway, every system has its „properties“ (I mean little imperfections).

Let’s see current state after the spider vanes were aligned to be in-line with the oposite vanes. Lesson learned? That double spider holders are hard to deal with. A friend of mine had the one from teleskop-express but it broke when he fast tightened the holding screws… another has the same issue like I had (but those people who downsize to 25% are OK with everything – not my case when every pixel counts). If you are about to get an ASA scope (which I recommend) then do ask for this to be perfectly checked. We have to put high demands on telescope manufacturers in order to improve things…