Shooting LRGB or RGB (broadband) images is becoming a more and more challenging task for an astrophotographer. Light pollution is the enemy’s name. There are essentially two ways (or three, counting narrowband imaging) how to deal with it. First, if you have a really bad skies suffering from strong LP and still want to shoot color (or having a OSC camera / DSLR) then you should probably get UHC-like filter (Ultra High Contrast or Nebula Filter). On the other hand, if your skies are moderate, you might consider a softer filter like the IDAS Light Pollution Suppression filter. Unlike other LPS filters (CLS, UHC, Nebula Filter) that tends to completely wash out yellow spectrum of light this one is claimed to maintain color balance.

Because I shoot RGB very rarely (bad skies and the few nights with some clear sky are around full Moon) I haven’t used the IDAS LPS-P2 much. Now I’d like to change it and want to shoot some RGB data for my H-alpha images. I wonder, how much light it really blocks when used along with Astrodon Tru-Balance Gen2 LRGB filters. All this on a CCD with Sony ICX285AL sensor (Atik 314L+).

Before I use this setup in the field I have done some testing. I have used an EL panel as a light source and took couple of light frames over LRGB filters without any other filter in the optical path in order to measure average ADU values that reflects the sensitivity of this imaging setup. Over Luminance filter I got 51000 ADU, over Blue 27000 ADU, over Green 14000 ADU and over Red 3900 ADU. Then I put IDAS LPS-P2 to the optical path and measured 40000 ADU over Luminance, 23000 ADU over Blue, 12000 ADU over Green and 3800 ADU over Red. Converting the ratios into percentages we get 22% lower signal on Luminance, 15% lower on Blue, 14% on Green and only 2.5% on Red. 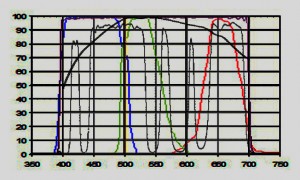 Well, the Astrodon Tru-Balance LRGB filters are optimized to fight against LP and therefore using a soft LPS filter doesn’t hurt too much. I hope this combination will help to get rid of the blue halos I get on not completely CA-free (chromatic aberration) telescopes (e.g. semi APO or ED). Also, it may help to keep the star sizes smaller. We’ll see, if I ever get a chance to prove it in the field. I post the results then.

UPDATE – the halos I talked about are not exactly halos, I meant that I get big stars in blue. Adding UV-cut filter, like this LPS didn’t help to the star sizes. Bigger stars in blue seems to be just a reality even though I don’t want to accept it and don’t like it.

now I use it for LRGB shots with my refractor (as Astrodon’s Blue Filter passes almost 100% of light starting at 400nm – which is OK for mirror systems that are perfectly apochromatic).