OK, it won’t be actually the first light, but a brief report from a third night (third use case) when I finally managed to handle the setup (cables etc.) and master polar alignment of this new friction drive mount made by Gemini Telescope Design in Hungary.

On the first night I messed up polar alignment because I did not purchase the polar scope (I was too cheap and did not want to spend any more money on additional astro equipment). I was hoping that I can do the PA with a method I learned from my astro-buddy (Pavel Vabrousek) that we were using in Chile in 2010. It’s based on simple comparison of two rather widefield images taken with a CCD camera of a rotating sky around the pole when the mount is completely stopped and when the PA axis of the mount is manually rotated during the other image capture. This way you get two images where you locate the point (X-Y position) of the spot that is the center of the circles and the goal is to match them to overlay using ALT/AZ screws of the mount. This sounds simple (and is very precise), but as there were freezing -11 degrees out there I did not have the mood to mess with it for longer than 30 minutes. Therefore my PA was too off (after PA I bumped into the mount when loading counterweight) to say anything about the mount performance. And before I started taking images, the clouds rolled back in. The 3 hours lasting clear sky window we had on 11th of February 2013 ended and I drove back home 100 km without any photons collected. More over that – I was then sick for next few days because of the cold weather – I spent another hour with attempts on GoTo alignment that first night.

On the other (second) night I already had the polar scope, but I did not collimate it well in the first instance and I did not read the proper instructions how to use it (not mentioning I should know it all as it’s very similar to my previous mount) which resulted in, again, poor PA. So at least I took some binned image as a first image of year 2013 (during first 5 moths of this year we had 5 nights of some (3 – 5 hours lasting) clear sky – it’s a total pain so I was happy for at least something to play with).

On the third night, I finally did everything just fine and was stunned by the tracking performance and quality of the mount. OK, there are few minor details about the mount, but I am too big nitpicker who is able to find critics (even subtle, but reasonable) on everything I had in my hands ever. Want to hear the conclusion? The unguided 6 min subs I took that night (for a certain reason I went with only 6 min subs that night) were totally equal to guided 6 min subs. But I was using short focal length setup with too big image scale (2.83 arc-seconds per pixel). Let’s see some images now. First image shows my nice setup Third use case of Gemini G53F in the field.

And second image shows the tracking error graph as smooth as I have never seen it before. Even though I did not measure PE yet (I even do not plan to do so as I know it’s very small with zero backlash) I think it’s obvious how good the mount tracks. Since I was using many previous mounts with the exactly same setup (guiding with miniBorg 50 using MII G1-0300 CCD camera) I think it’s “fair” to compare the tracking error graph from Losmandy G-11 Gemini and Sky-Watcher HEQ-5 mounts as can be seen on third and fourth image below. 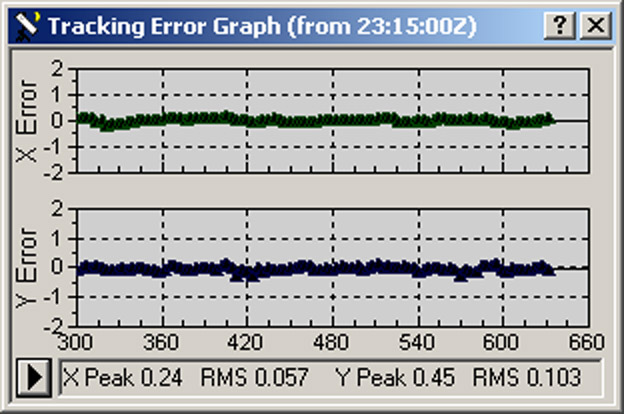 I really liked my first real astro-mount the SW HEQ-5, I even still own it as it’s nice, lightweight and convenient for a short refractor imaging. I was really impressed by the quality of my other mount I had, the Losmandy G-11 Gemini GoTo, but as my imaging skills improved I became more and more demanding on the imaging equipment. The Losmandy was perfect until I used a 2800 mm focal length telescope with an Off Axis Guider. Also, as I like to stay on the safe side (in all circumstances) I tend to use overkill setups. And I knew that one day I will “have to” use a Newtonian telescope because it simply collects much more light then any affordable refractor and would have zero chromatic aberration, which is something I have not experienced before. Because couple of my friends were happily using Gemini G42+, the predecessor of G53F (F stands for friction drive mount) for even unguided imaging, it was a clear choice which mount will be my final one

The choice was sooo easy because you get top-notch performance for half of the costs of e.g. Astro-Physics mounts or Paramount (range starting at 9.900,- eurodollars). In the similar range there’s also Mesu 200 mount, but that caught my eye only as a top candidate for ugliest design ever seen (and I care about design, I love things that work and that look good). Advertised 4” peak to peak PE seems to much to me as I hope for half of that with G53F and you know what, advertised not always equals reality (reality is worse then what we hope for). On first look the 65kg or 100kg loading capacity is a total non-sense just from a brief look on the mount head that is no more rigid than “poor” G53F aimed at 45kg of load. That’s enough of critics of something I never had in my hands so please, dear readers, do not take my words seriously, I am an extraordinary guy with shifted mind! So far, all mounts I have purchased were good decision so I believe (I hope

) this third one would be too.

Anyway, there are couple of things that I do not like. Mainly it’s the Pulsar 2 controller that I find way too user unfriendly. It’s different than what I was used for from Losmandy’s nice GoTo handpad. But I have already learned how to use it and the major drawback (missing catalogs for GoTo) is resolved now (see LBN, LDN, Sh, and stars by Pavel P.) though you still have to (at the time of this writing) upload them into e.g. Planets (e.g. LDN counting almost 2000 of objects) or User (has 500 entries) for Sh-2 catalog having 313 objects, or other sections as these base names are fixed. Another thing is driver for MaxIm DL (or ASCOM) that doesn’t work 100% well, I am having some issues with it, but found a way how to use the mount (guiding over telescope connection) so it’s fine. From mechanical point of view I was more happy with setting up Losmandy G-11 that was lot more easier to do – also having elevation scale and two axis bubble level was a nice feature of Losmandy (the G53F is fixed by one screw from the tripod pier while the G-11 had three side screws and was easy to put on the tripod – with G53F I have to be more careful when putting it on the tripod pier). Polar scope of Losmandy G-11 was much easier to use, but on the other side – the G53F is completely different performance level equipped with off-axis polar scope and the best news about the HP-2 polar scope is – that it holds the collimation well so you do not have to bug with it every single time if you store it carefully). The HP-2 polar scope has bigger aperture and magnification and therefore the PA is more precise then with Losmandy. And that really counts. With G53F you jump into a mature world of professional equipment where the details you never cared about (refraction correction, mount modeling parameters, balancing etc.) get their meaning. What I really like on G53F apart from performance/costs ratio and the fact it looks cool enough is that the current hand controller (I like to use HC I am used to it) has integrated GPS receiver so I do not have to bug with coordinates setup every single time I go out for imaging (I am mobile photographer having to setup every time from scratch).