Some nights we “astro-imagers” are out of luck. Nothing works as expected, everything … up, time flies by and the chances for a successful imaging night are becoming minimal. What should I do then? When – at least – the mount finally works?

Something positive, say, check out how would an achromatic refractor perform with narrow band filter mounted on a CCD camera. For this purpose I used a TS (Teleskop-Service) 100/700 achromatic refractor. Unfortunately, I had no suitable focal reducer or field flattener at my disposal. Therefore a side-effect of this test case would be to prove how flat is the field covering 11mm diagonal of my CCD camera (Atik 314L+) at the native F/7.

First goal was to attach the camera with filter wheel to the telescope. Since there are no threads on the focuser I was forced to use 2” barrel connection that is always loose. Moreover, I used also a diagonal mirror – therefore two loose barrel connections in one setup. Hard to expect perfect performance of such a setup as proved by the output from CCDInspector.

So, here we go. First image shows a star-field around Caph (constellation of Cassiopeia). It is a 10 second exposition over a Luminance filter. 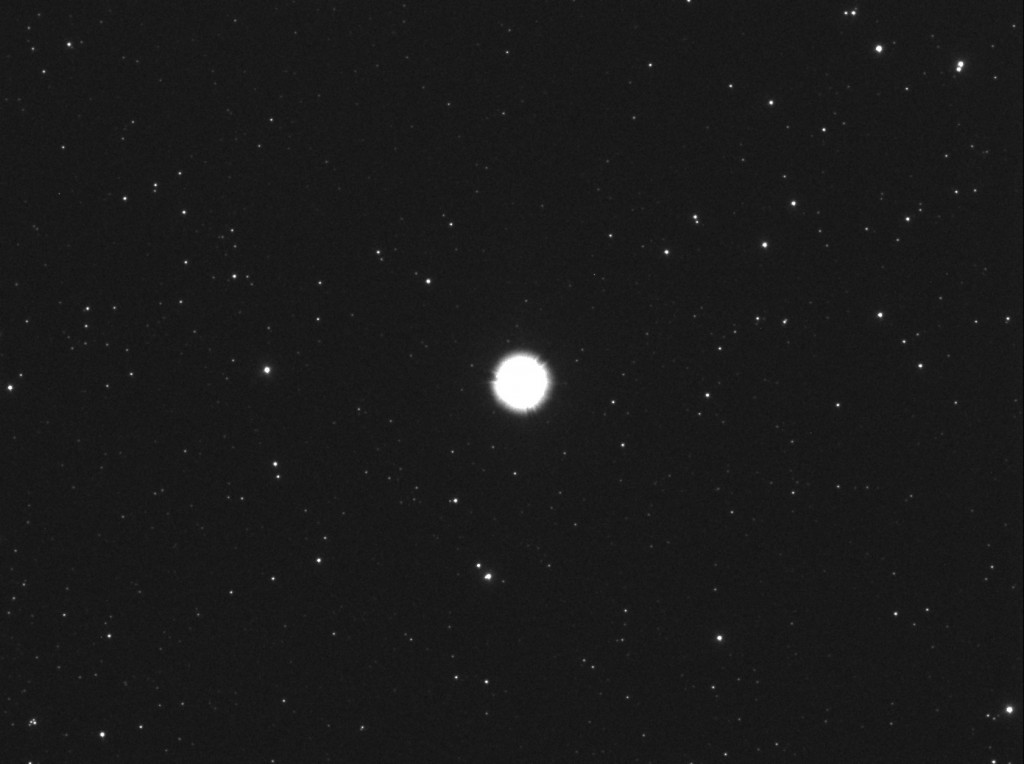 Next picture shows a 3D plot of field curvature analyzed by CCDInspector. The plot looks good to me. As expected, a much longer, guided 300 seconds long exposition (5 minutes) looks much worse, but still shows good results. Only one corner suffers from elongated stars. This result matches the star-field Luminance image. 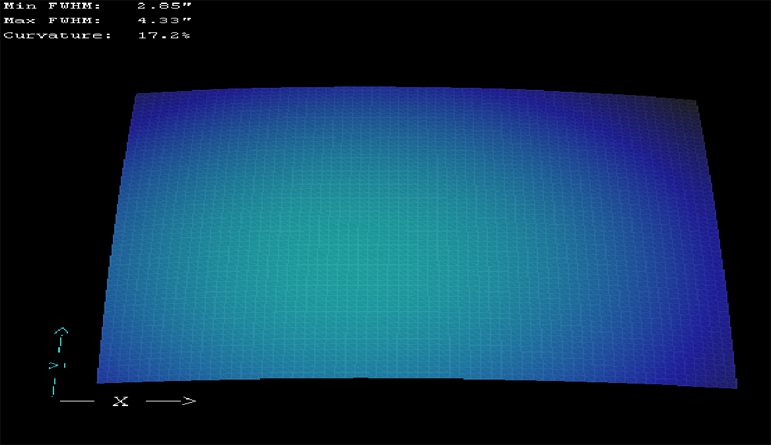 Therefore, it seems that this refractor can be used with a 11mm diagonal CCD without field flattener. Anyway, for perfect results, I hope to get some suitable focal reducer and flattener in order to shoot at faster F-stop ratio. F/7 is a bit slow, even for such a great CCD like Atik 314L+.

Given the circumstances – Moon almost full, in perigee, shining in constellation of Taurus – there were not many suitable objects for Hydrogen Alpha imaging left. I decided to shoot NGC281 (Pacman Nebula) that I have never imaged before (I am still missing a middle focal length telescope). The quality of final image is very poor since it is only 90 minutes of data (5 minutes sub-expositions). Also, I had heavily bumped into the mount and lost perfect polar alignment which resulted into rotation of the field that is mainly noticeable on the left side of the image. Then I had problem to achieve perfect focus (managed to dial in only „reasonable“ focus). Ultimately, non working heating (this time – short cut directly on the heater strap) caused every next image to miss contrast and led to lower signal level. Fortunately, I have purchased 12V heater fan recently, that I used to fight the dew after every third sub-exposition (RH – relative humidity – was up to 90.4% that night).

Let’s see the poor result to judge whether or not the narrow band imaging is possible with an achromatic-only refractor. The FWHM of best image was around 2 pixels, that is 3.78 arc-seconds, less than 13um spot size under these adverse conditions (the Pacman Nebula was getting as low as 30 degrees above horizon).

Update
The biggest problem is that you need to create some custom front-aperture mask in order to improve the spot-size quality and the shape of stars to become perfectly round, especially the bright ones… Another issue is that ordinary achromatic refractors come with poor quality focusers so you have to do a lot of DIY to make it an astrograph.