To get the best out of your new CCD camera it is very important to understand all the aspects and effects of various settings and to use the camera in the correct-most “mode”. Well, I have the camera already for few months, but I still wasn’t able to measure basic parameters and to find the best settings. I purchased the OSC CCD instead of a TEC cooled DSLR (for various reasons) knowing that I will be limited in some applications like capturing videos (frames for a video) or shooting star-trails. The main reason is simple – it takes 19 seconds to download a full scale image out of the camera. Therefore I decided to sacrifice color information and use the camera in 2×2 binning mode where the download time of a monochromatic image is half. This new “need” (actually I wonder if I could even catch some meteors or do limited time-lapse videos) and months of cloudy nights finally made me to thoroughly re-test the camera.

Let’s start with binning 2×2. In this mode I left the driver-Gain settings set to zero as I was able to easily saturate the pixels (reach 65535 ADU, limit of 16-bit ADC) and the Offset was OK at around 130. I used value of 130 that I previously used for bin 1×1 shooting. A single bias frame had average values around 1000 ADU. In this mode I measured following:

Then I did a light response test – linearity test to complete testing of this “normal” mode, see following chart. 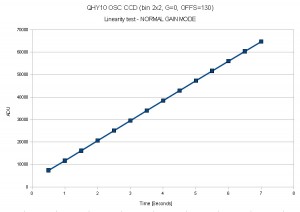 Because I plan on using this settings along with 10mm (all sky) objective lens for various applications (curiosity) I have “invented” a Force mode. It should be like a High-ISO mode known from DSLRs. It’s because I will not make longer sub-expositions than 30-45 seconds which means I can sacrifice a bit of the dynamic range. For this Force mode I set driver-Gain to 24 and Offset to 127 as at this combination I have got the best noise results and considered the signal increase of 50% to be enough (see the linearity graph – using the same light source, I will saturate the pixels in 4.5 seconds instead of in 6.5 seconds with driver-Gain set to zero). I measured following values for this Force mode:

Then again, I did a light response test to complete testing of this “force” mode. 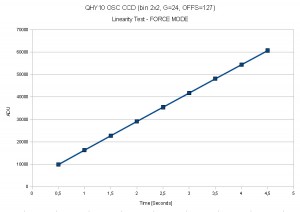 To complete it all, I reverted to 1×1 binning mode. In the past (few months ago, when I got the camera) I ended on using driver-Gain set to 15 and Offset to 130. Now I re-tested the levels and decided to lower the driver-Gain a bit (in my first, second and 3rd light of this camera I had lot of gradients in the image, mainly present in the sensitive green channel, that I suspected were coming from not perfect flat field calibration frames – though vignetting was calibrated well, maybe a bit over). We’ll see if I find a workaround or a real correct-most way for flat calibrating an OSC camera (all the RGB pixels needs to stay within linear range in all four corners of the image – not too dark, and in the center of the image – not too bright).

In order to fully understand all the pixels under the Bayer mask I split my raw data into four planes (p1, p2, p3 and p4) representing Red, Green1, Green2 and Blue channels respectively. For every channel I measured its noise characteristics:

Ultimately I ended capturing data for light response tests to check linearity of all four color planes for QHY10 OSC CCD with driver-Gain set to 13 and Offset to130 and 1×1 binning mode. 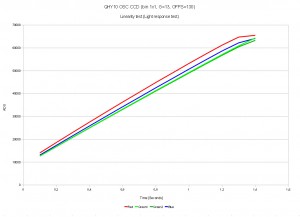 All the settings now looks really good to me (the used EL-panel was a bit “reddish” but that should not have any impact on the curves/lines). I will finally need some clear-sky nights to check it all out, step by step.